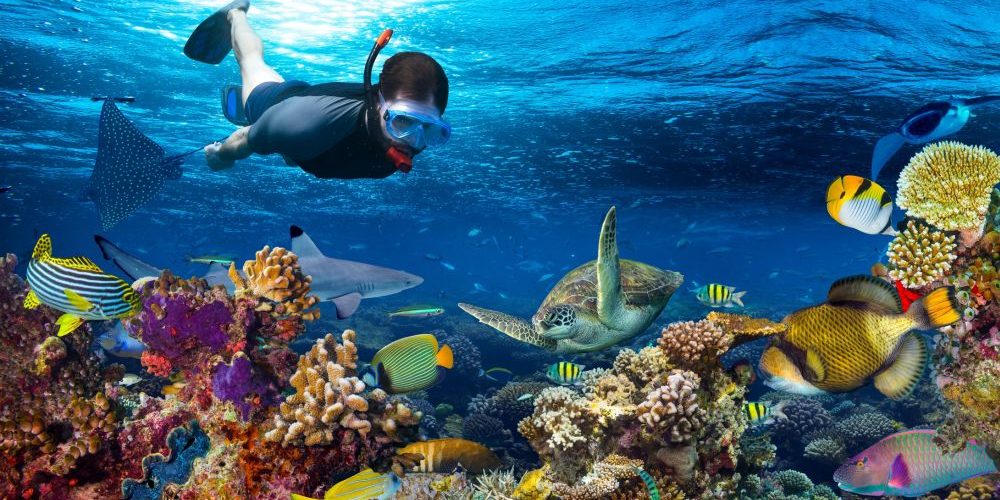 The main island of Zanzibar and its sister islands in the archipelago are home to extraordinary coral reefs and stunning marine life.

The surrounding Indian Ocean hosts a variety of humpback whales and dolphins which roam the waters in annual migratory trips and are a massive attraction to both locals and visitors.

Other creatures that call the marine parks home include Sting and manta rays; giant groupers, whale sharks, and barracuda.

The archipelago is host to many conservation areas and marine parks, dive sites and turtle sanctuaries like Prison Island.

Zanzibar’s marine parks and reserves are exceptionally rich in their diversity of coral, bird, culture and plant life. To protect them against overfishing, coral mining and mangrove deforestation, strict regulation is enforced while visiting the parks for more extended stays.

The Menai bay conservation area became a protected area in 1995 and covers an area of over 460 square kilometers. Located to the south west of Unguja, it falls under the World Wildlife Fund, WWF and is managed by the local community. This is a beautiful area with stunning coral reefs and mangrove forests.

Many species of tropical fish fill the reef creating a spectacular array of color in the clear turquoise water. You can watch sea turtles feeding on sponges as they manoeuvre in the clear waters.

Chumbe Island is a privately-managed nature reserve, and many visitors are attracted to its clean sandy beaches and the pristine coral reef.

Excited snorkelers swim alongside batfish as they battle for space while curious lobsters glide past waving their feelers.

The Mnemba island conservation area is another treasured gem in the archipelago. Its white sandy beaches surround the island with the turquoise water landing in waves on its shores. One of the diver’s paradises, the circular reef is suited for both novice and experienced divers, with turtles, reef sharks, and dolphins competing with divers.

As the name suggests, it was a prison and it used to house slaves. Once slavery was abolished it became a quarantine for people with deadly diseases, but over time the prison fell into ruin and now the island is a turtle sanctuary. You can find many species of turtles in this island. You can spend a day on the island with these wonderful creatures.

Misali island, which is located in Pemba, became a protected area in 1996 and is suitable for drift diving. It is home to some 350 species of fish and is managed by the local fishermen. Sea turtles frequently lay eggs on the beach, and the island is largely unspoiled by tourism.

To visit the marine parks, it is advisable to obtain clearance and certification from the relevant authorities to ensure safety to both the visitors and the marine animals.